Defending champion Amr Shabana and former champions David Palmer and Thierry Lincou – who boast seven world titles between them – took their anticipated places in the last 16 of the $327,500 Saudi PSA World Open Squash Championship after contrasting second round wins in the richest ever event on the PSA World Tour at Sunset Beach Resort in the Saudi Arabian city of Al-Khobar.

“I won the first game quite easily,” explained the US-based 34-year-old. “Not by doing much, just moving the ball around and he made the errors. He cut them out in the second, and I just kept doing the same thing and he was picking them off for winners.”

Kemp, the 29-year-old world No27 who is making a comeback after hip surgery, recovered from 4-6 down in the fourth game to force a decider. But, after winning the opening point, the English left-hander hit the tin six times – all unforced – as Palmer romped to victory.

“It’s great for us to have so many good youngsters coming through in Egypt,” said the 31-year-old ‘elder statesman’ of Egyptian squash after his first ever Tour clash with Reda. “You can’t afford to relax with them pushing us, so it keeps us older ones on our toes.”

Reda threatened the third seed in the first game, but at six-all Shabana stepped on the gas as only he and a couple of others can. But the 21-year-old from Cairo showed enough that he may soon be posing a stiffer challenge to the top players.

“He just needs to work hard and get a few more matches against the top guys,” advised Shabana. “But with the likes of him, Mosaad, Shorbagy and others coming through, it’s looking good for the future.” 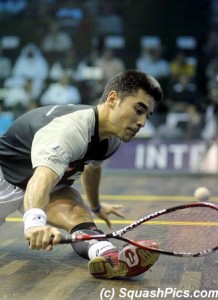 2004 champion Thierry Lincou was one of two Frenchmen to establish their positions in the third round when he beat Egypt’s Omar Mosaad 11-6, 11-8, 11-3.

“That was much better than in Chicago,” said Lincou, who had lost to the 22-year-old from Cairo in the recent US Open. “There it was cold and dead and I just couldn’t get him off the ‘T’ – but here it was bouncier: I could get him moving more.”

Asked about his prospects about a second world title, six years after his first, Lincou was coy. “I don’t think about the end of the tournament, I just try to keep focused on the match of the day, and that’s when I play my best,” said the 34-year-old No7 seed from Marseille. “It’s great to have the French support team here before, during and after the match, it really helps me to stay relaxed.” 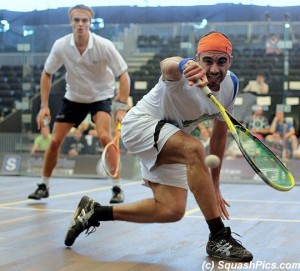 Egyptian Hisham Mohd Ashour produced the day’s only upset when he beat 12th seed Laurens Jan Anjema 11-7, 11-9, 11-7 – just four days after the Dutchman made his debut in the world’s top ten.

“That’s what I’ve been trying to do all my life,” said the delighted 23rd seed, older brother of world No1 Ramy Ashour. “I used to feel heavy, so although I knew I could kill the ball, retrieving was a problem and I had to go for winners too soon.

“Now I’ve trained hard, lost weight, and I feel I can retrieve for as long as I want to, so I don’t have to go for winners. I’m even more motivated for the next round now, I want to show all the people that believed in and helped me that I’m good – I want to pay them back!”

Ashour senior will now face England’s Nick Matthew, the top seed from Sheffield who is bidding to become the first ever English winner of the title. Matthew despatched veteran Canadian Shahier Razik, the 26th seed from Toronto, 11-5, 11-1, 11-7. 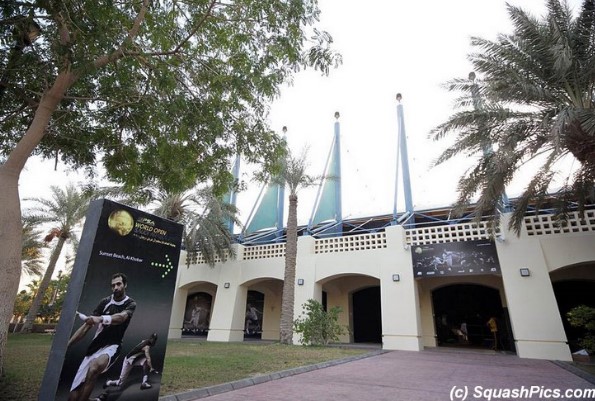