Defending champion Amr Shabana secured his place in the second round of the Delaware Investments US Open after shaking off Colombian number one Miguel Angel Rodriguez in the opening round of the PSA World Series squash event at Drexel University in Philadelphia.

Undefeated in the US Open since 2007, it was the seventh-seeded Egyptian’s tenth straight win in the event. 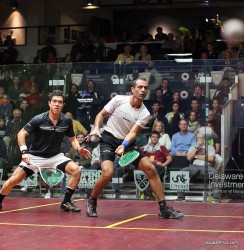 The penultimate match of the day was a much-anticipated clash. Shabana, a four-time world champion, was looking lean and fit – but the speedy and unorthodox qualifier from Bogota arrived in Philadelphia fresh from three PSA Tour title triumphs in South America over the past six weeks.

Rodriguez led 9-4 in the first game, but the experienced 33-year-old from Cairo entertained the crowd with his dazzling racket skills to take a two-game lead.

And, despite a trio of successful appeals to the video referee by the Colombian near the end of the match, it was Shabana who closed out the match 11-9, 11-6, 15-13 after 60 minutes.

Shabana will now face fellow left-hander Laurens Jan Anjema in a repeat of their quarter-final clash in the 2011 championship. The Dutchman faced Aamir Atlas Khan, the Pakistani who defeated US number one Julian Illingworth in a marathon qualifying final.

Khan improved game by game but Anjema proved too strong, claiming the final last sixteen spot in an 11-5, 11-7, 11-9 victory. 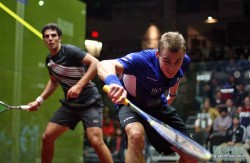 Second seed Nick Matthew was forced to recover from a game down to overcome tall and imposing world No10 Omar Mosaad. Despite the Egyptian’s best efforts, world No2 Matthew finally took the match 7-11, 11-7, 11-5, 11-9.

“It’s tough to play Omar,” said the 2011 runner-up later. “I like to play a fluid game but we always seem to have a lot of stoppages and lets. It wasn’t a lot of fun but I’m pleased to be through to the next round.” 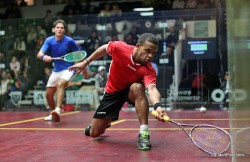 Matthew, the 2007 champion, will take on England team-mate and Commonwealth Games Doubles gold medal-winning partner Adrian Grant for a place in the quarter-finals.

“I don’t plan to have five-setters,” said the relieved Londoner. “But I suppose I have a lot of experience at them which stands me in good stead! I was playing well enough, I had leads in all the games except the fourth.

“I just need to be able to finish them off better – not slow down near the line like Usain Bolt!”

Matthew and Grant’s clash will be the third all-English second round meeting after Peter Barker and Tom Richards also survived their opening round matches.

The day started with a solid performance from world No14 Richards against Ong Beng Hee, the former world No7 from Malaysia. After dropping the first two games, the 32-year-old from Penang took the third – but Richards reasserted in the fourth, taking advantage of his six-year age advantage to win 11-6, 11-3, 10-12, 11-6.

“It will be a tough match against Tom, but hopefully I can hold off the youngsters for another year or two,” said Barker.

“He’s very quick,” admitted 2009 runner-up Ashour. “I had to push myself all the time, he could have taken any of those games. I’m happy with how I played but I’ll have to push myself harder in the rest of the tournament.

Ghosal, the top-ranked Indian from Kolkata, tweeted later: “Lost to Ramy Ashour today in 3 really close games. Obviously disappointed with the result but have to take positives from that performance.”