Amr Shabana confidently began his bid to become only the third player in history to win five World Open titles by beating English qualifier Chris Simpson in the first round of the Saudi PSA World Open Squash Championship at Sunset Beach Resort in the Saudi Arabian city of Al-Khobar.

The $327,500 PSA World Tour championship, the richest ever in world squash, is being staged in Saudi Arabia for the first time, after five successful years of the Saudi International.

Shabana, the defending champion from Egypt, had to work hard to finish off Simpson in three games, especially after falling 5-0 behind in the third.

“I didn’t play well here last time, so I’m happy to get through the first match,” said the third seed from Cairo after his 11-7, 12-10, 11-8 win in 36 minutes. “I’ve been watching him for a few years – he’s one of those who has good technique so it’s difficult to be relaxed against him. I tried not to go short too much, when I did he was putting it away.

“These days I’m just happy to be healthy and not injured. I’m not quite that yet, but I’m getting there!” 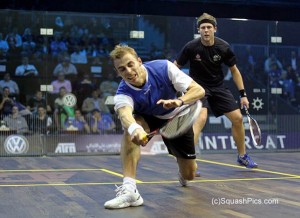 Nick Matthew, seeded to become the first English winner of the title, also overcame his first hurdle in straight games. The 30-year-old world No2 from Sheffield never looked in any real danger, but neither could he afford to relax against Ryan Cuskelly – ultimately beating the Aussie left-hander 11-4, 11-5, 11-6 in 35 minutes.

It was an Englishman that produced the quickest win of the day: Jonathan Kemp, the 20th seed from Halifax, despatched Brazilian Rafael F Alarcon 11-2, 11-5, 11-9 in just 11 minutes.

Having torn his calf muscle on Friday, the 33-year-old from Sao Paulo simply went for everything – except rallies! The first two games were over in a flash: Alarcon fared a little better in the third, and led 9-7 – but Kemp finished it off, to smiles all round.

“Three nil or three-two, it’s all the same,” said the Brazilian after losing one of the shortest World Open matches on record.

The day after reaching the world top ten for the first time, Laurens Jan Anjema looked to be on course for an energy-saving victory over Mohammed Abbas – but the experienced Egyptian, a qualifier, had other ideas as he stormed back to equalise.

“I was as surprised as anyone to win that – especially in three,” admitted the 26-year-old from Budapest. “I hadn’t played him before so I don’t know if it was me playing well or him playing badly, but I’ll take that for sure.”

Gregory Gaultier – twice a World Open runner-up – played the first match on the all-glass court, against local wildcardMohammed Taher Al-Saif. Ranked 460 in the world, Al-Saif may have been overawed by the occasion, but kept the Frenchman – now ranked 456 places higher – on court for 23 minutes before Gaultier claimed his anticipated victory 11-3, 11-5, 11-8.