England’s world champion Nick Matthew was held up by his Egyptian opponent Mohd Ali Anwar Reda before claiming a place in the quarter-finals of the Canary Wharf Classic, the PSA World Tour International 50 squash event in its ninth year at the East Wintergarden in Canary Wharf, London.

He was also held up by an unusual emergency announcement during the match, informing a member of the full-house crowd that a donor kidney was available for an emergency transplant at the Royal London Hospital last night. 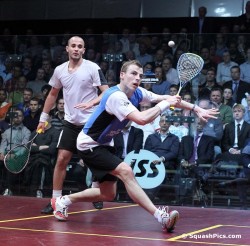 Defending champion Matthew was playing his first PSA Tour match since losing to another Egyptian Ramy Ashour in the semi-finals of the North American Open.

Reda surprised Matthew by winning the second game. Matthew was in control for the majority of the first game and led 9-6 in the second, but Reda hit back with a succession of tight drives and accurate drops to win it 12-10.

Matthew regrouped mentally in the third game and imposed himself on the match once more. From 5-5, he stepped up the pace, hitting tight, crisp drives to all parts of the court to win six points in a row.

The Englishman maintained the pressure at the start of the fourth game to lead 5-1 but Reda rallied to draw level at 5-5 and again at 6-6.

From then on, Matthew stepped up the court and attacked superbly. The 31-year-old from Sheffield had Reda running from corner to corner chasing an array of winners from the world champion.

Matthew said: “It has been nice to have some time between tournaments to work on different things. There is a difference between training fitness and match fitness and tonight was a good hard match to start the tournament with to get time in on court. 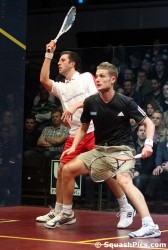 “Having said that, I know I will need to play better against Daryl Selby on Wednesday.”

Matthew’s match lasted exactly an hour and England team-mate Selby was on court for just five minutes less as he was forced to battle past qualifier and fellow Englishman Robbie Temple.

The 25-year-old left-hander, who employs a double-handed backhand, more than held his own for long periods of the match.

Selby opened up a big lead in the first game but the next two were much closer with hardly a point separating the two players until Selby, the world No11 from Essex, stepped up the pace at the end. 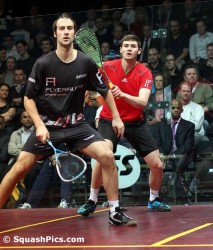 The world number 18 from Paderborn overcame 22-year-old London qualifier Adrian Waller in straight games. Space on court was at a premium in a match featuring two 6ft 3in combatants.

In the opening two games, the scoring was close until the middle phases, when Rosner raced ahead. In the third, Rosner led 8-1 before left-hander Waller suddenly found a spell of inspired form to make the scoreline look much more respectable. 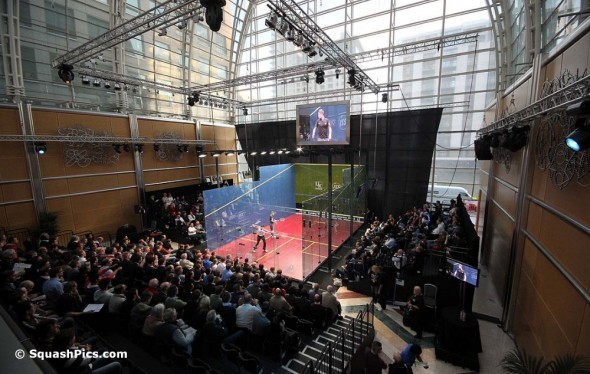