Egypt’s No4 seed Karim Darwish successfully began his defence of the El Gouna International Open title in the opening match on the all-glass court at Abu Tig Marina in El Gouna.

The third PSA World Series squash event of the year, being staged in the Red Sea resort for first time since 2010, is celebrating the return of international sport to Egypt after the revolution. 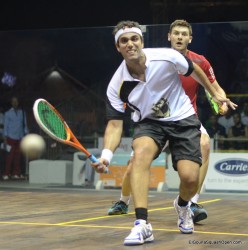 Darwish, whose triumph in 2010 marked his first World Series title on home soil, got his title defence underway smoothly with a straight games win over qualifier Adrian Waller. The tall Englishman stayed with the home favourite until the middle of each game, but former world number one Darwish eliminated his chances in the endgames.

“It was a hard game, I’m happy to finish it in three,” said the 30-year-old from Cairo. “Adrian has good racket skills – he makes me think a bit of James, he likes holding the ball, but obviously has a bit of lack of experience on the glass court.

Darwish will now play another Englishman for a place in the quarter-finals. Left-hander Jonathan Kemp eased through with a quick-fire win over Omar Abdel Meguid, the Englishman’s shot-making too hot for the Egyptian qualifier to handle. 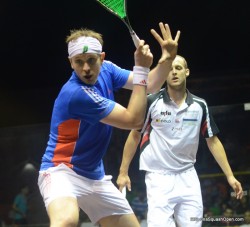 Top seed James Willstrop “did what I needed to do for enough games to win” against Nicolas Mueller, the dangerous young Swiss opponent who gave England’s world number one a stiff test for two of their four games before seeing the fourth run away from him.

“He always takes the game to you,” said the 28-year-old from Leeds. “But actually tonight, I thought he was being a bit conservative for the first two games, but started to let go a little bit in the third. He broke me a little bit there, fantastic drop shots, sublime shots and nicks, so it was good to come back to business into the fourth. It was a very enjoyable match indeed.”

Willstrop’s next opponent will be training partner Saurav Ghosal, the Indian number one who is also based in Leeds. But the speedy Kolkata-born 25-year-old had to fight back from two games before overcoming England left-hander Robbie Temple.

“I had to dig pretty hard to win this,” admitted Ghosal. “Winning the third helped, but he was still in it. In the fourth, I had a good spell, and I started to believe, felt more confident. And physically, I felt fine.”

Dutchman Laurens Jan Anjema was too strong in the end for Omar Abdel Aziz, finishing off the match powerfully after the Egyptian had fought back well to take the second game.

“He surprised me, because I thought of him as not a typical Egyptian player, more of a ‘grinder’ in the positive sense, as in, able to make it tough and the rallies long,” said eighth seed Anjema after his 11-5, 6-11, 11-4, 11-5 win. “But when he took the opportunities I was opening for him in that game, I realised that he was probably not ‘a typical Egyptian’ after all!” 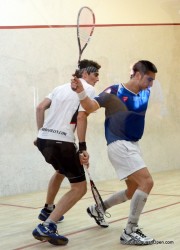 The decider alone lasted 31 minutes, with Lincou coming through from six-all to secure his place in the last 16 – just days after his 36th birthday.

“When I was able to get back into a bit more control at the back, I was able to come back into it tactically,” revealed Lincou. “I’m extremely happy, I have found my confidence again in my body, in my ability to win. If it hadn’t been for my mates, advising me between games, I’m not sure I would have made it today.”