Australia’s world No15 Cameron Pilley will play no further part in the $327,500 Saudi PSA World Open Squash Championship after crashing out of the first round of the richest ever event on the PSA World Tour at Sunset Beach Resort in the Saudi Arabian city of Al-Khobar.

“For a while now, I have been losing a bit of motivation, especially after my defeats in Egypt and Qatar,” explained Castagnet afterwards. “And my last two tournaments, where I drew the top seed each time didn’t help to get my confidence back!

“Today I got on court without any pressure, and I was lucky that Cameron didn’t play his best squash. I’m really happy, and I’m now going to prepare for my match in two days.” 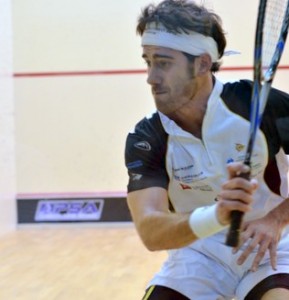 But Spaniard Golan is a former world No10 making a comeback after a long layoff following a knee injury – and had to play at his best to overcome the new world No22 from Chennai in 53 minutes.

Golan will now face England’s James Willstrop after the sixth seed recovered from a game down to beat Swiss number one Nicolas Mueller 9-11, 11-4, 11-7, 11-2.

“After I lost the first, I had to tackle the match in small steps,” explained Yorkshireman Willstrop. “First get level, then take the lead, then finish it. That’s what I’m trying to do for the whole tournament, in the past I maybe thought too much about reaching the final or winning it too soon.

“Now I’m just concentrating on smaller targets. It’s a long week, or two weeks hopefully, you can’t afford to think about these things all the time.”

The last match of the day was almost the most dramatic, as second seed Ramy Ashour, winner in Saudi last year and many people’s choice to regain the world title he lost last year, came close to falling at the hands of last-minute ‘lucky loser’Kristian Frost Olesen.

There was no hint of trouble in store as world number one Ashour raced through the first game, delighting the crowd and confusing his opponent with a bewildering array of winners. 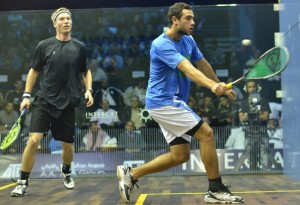 The second game started in the same manner, and an early night seemed on the cards, as Ashour raced to a two-game advantage.

But the Egyptian soon seemed to be in trouble. At 2-8 down, and bending over, holding his leg, Ashour was asked by the referee if he required an injury timeout.

The offer was gratefully accepted – but on his return Ashour’s movement was still severely hampered and Frost took full advantage to reduce his arrears.

Still struggling with his movement in the fourth, and at times in obvious pain, Ashour relied on his shot-making to keep him just ahead of his opponent. And, after a tense game which could have gone either way, Ashour delighted the crowd with a return of serve straight into the nick to claim an improbable 11-1, 11-5, 3-11, 11-9 win after 42 minutes. 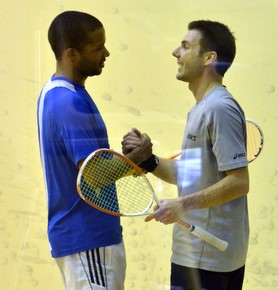 The second day of first round World Open action in Saudi saw the end of the distinguished career of Frenchman Renan Lavigne. The former world No17 from Marseille faced England’s 15th seed Adrian Grant. Lavigne battled for 36 minutes before the left-hander from London secured his predicted 11-4, 11-9, 12-10 win.

“I haven’t played a PSA event for a while, but I entered because the closing date was in August and it looked like I would make the main draw,” explained the 36-year-old who turned pro in 1996. “Since then I’ve asked PSA to take my name off the ranking list.

“I trained well in September and October, then got injured so this is my first match in a month, and it showed. I’ve never been injured before, but I guess I’m training less and the body is less able to cope with the stresses at my age.

“There’s a few things changing in my life now, I’ve started studying again and I have my first child due in June, different reasons to get up at 6am!”

“I’m pretty tired,” explained the 25-year-old Australian. “I had a 48 hour journey to get here, with flights being cancelled and delayed from Leeds then Manchester, and got here at 5am this morning.

“I slept for five hours, had a 20-minute knock, had breakfast and then went on for my match. I told myself I just had to deal with it, and I think that helped me in some ways, I was moving surprisingly well.”