Unseeded Frenchman Mathieu Castagnet produced his “best performance ever” – and the first upset of the Kuwait PSA Cup – when he beat England’s 12th seed Tom Richards on the second day of second round action in the third PSA World Series squash event of the year at the Qadsia Sporting Club in Kuwait. 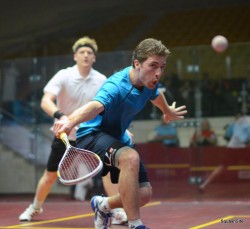 “We started at a rather fast pace, and I thought that I would have trouble keeping this up if it lasted too long,” Castagnet told the event website www.kuwaitpsacup.com later. “So I slowed the pace right down, just trying to keep it glued and tight, nothing fancy really, but accurate.

“I had the experience of my match against him in Hong Kong, where I ended up losing 12-10 in the fifth despite having several match balls. So this time I knew I had to push all the way through,” added the delighted 26-year-old from Aix-en-Provence.

World No14 Walker was playing his first PSA World Tour event of the year after making history last month by becoming the All Africa champion – winning the first international squash title for his country Botswana. 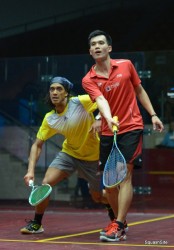 But Malaysian Beng Hee, in his 19th year on the PSA Tour, dug deep to reach the third round of a World Series event for the first time for more than three years.

“Hey, I won! I haven’t won a match for nine months!” said the delighted former world No7 from Penang. “I think that I was lucky to get to play Alister as he is just coming back from injury, and he made a lot of errors tonight. I know exactly what he is going through.”

Meanwhile a further trio of Englishmen and Egyptians made it through to the last 16 round. Englishman James Willstrop, the defending champion, despatched France’s Gregoire Marche 11-9, 11-5, 11-3.

“I’ve never played Greg before,” said the world No4 from Leeds. “But I saw him play obviously – he’s been improving a lot. He is an exciting prospect for France and played well.”

Rival Nick Matthew, the No2 seed from Sheffield, was made to work hard by fellow Englishman and fellow 32-year-oldAdrian Grant – but closed out the match against his Commonwealth Games gold-medal-winning-doubles partner 11-7, 11-8, 11-9 after 58 minutes.

“It’s hard to play Adrian because we go way too far back,” said Matthew. “It was not the prettiest of performance, but then again, the court is much bouncier than we’ve been playing on recently. I feel that 3/0 is a harsh score for Adrian. He played the right game, was very aggressive, very positive, and when he plays like that, he can be a danger to anybody.”

In the final match of the day, Daryl Selby completed the English trio by beating Australia’s Ryan Cuskelly 11-5, 11-5, 11-4 to set up a third round meeting with England team-mate Matthew. 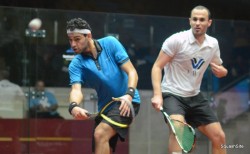 Sixth seed Shorbagy, 22, took the lead in the decider, but 23-year-old Reda fought back with a run of six points to reach match ball at 10-6. But a relieved Shorbagy held his nerve to claim victory, and retain his unbeaten record over his older compatriot.

“In the fifth I had a good lead, but suddenly I went from being 6-3 up to being 10-6 down,” said Shorbagy. “I was getting more and more nervous, so I decided to hit the ball harder and harder, and to make the time between the serves as quickly as possible, to prevent me from thinking. And I think that surprised him a bit, and he started making errors.

“The good news is, I had a very hard match against him in the Worlds in Qatar, and I then had an amazing tournament. So I guess this is a good omen for the rest of the event,” added the UK-based world No5. 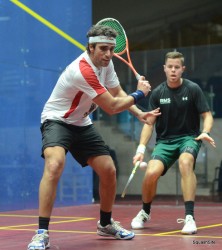 “I decided in the third that, no, I didn’t want to play a fourth,” said Momen. “I’ve just been playing tournaments, not training properly, so I’m very pleased with the outcome. Beating Cameron is a good result for me, he is a very tough competitor, so a 3/0 win is really a great result.”

Darwish, back in action after being forced to withdraw from last week’s North American Open with a calf injury, admitted that he was not focused throughout the match.

“Sometimes at two-nil up you feel almost too comfortable and let your concentration slip a bit,” explained the former world No1 afterwards. “The first two were quite comfortable but in the third he hit some good, if risky, shots and my level slipped. I managed to get it back in the fourth and played like I did in the first two.”