Skip to content
The first day of quarter-final action in the Delaware Investments U.S. Open at the Daskalakis Athletic Center at Drexel University in Philadelphia saw a sensational upset in the women’s draw and the guarantee of an English finalist in the men’s competition.

Top seed and world number one Nicol David, will have to wait at least another year to add one of the few major titles missing from her record as she was sensationally beaten 11/9, 6/11, 11/9, 11/4 by Australia’s Kasey Brown, the sixth seed. The Malaysian, five times World Champion and world number one for almost six unbroken years, had won all nine of their previous encounters and the victory was certainly the best of Brown’s burgeoning career to date. 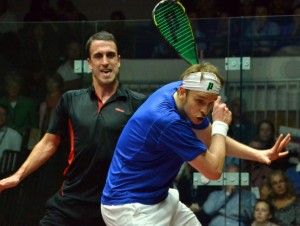 Three Englishmen featured in the men’s quarter-finals. First, top seed, world champion and world number one Nick Matthew who won the U.S. Open title in 2007, beat Mohamed El Shorbagy, the two-time world junior champion who has broken into the upper echelons of the senior rankings 11/5, 9/11, 11/3, 11/6  in 65 minutes.

An all-English matchup followed, as third seed James Willstrop met Peter Barker, the fifth seed. The pair have met many times in junior and senior events – they contested the World Junior final in 2002 – with Willstrop holding the upper hand, leading 12-1 in their PSA tour meetings. The tall Yorkshireman added one more to that tally as he won 7/11, 11/5, 11/6, 11/7 to sete up an all-English semi-final with Matthew.

Daily updates from the PSA