English duo Nick Matthew and James Willstrop were unable to exploit home advantage today in their county of Yorkshire when they went down in the semi-finals of the Allam British Open Squash Championships, the fourth PSA World Series event of the year in Hull.

The historic event came to life at the KC Stadium as the capacity crowd in the stands of the Hull City football ground enjoyed dramatic semi-final clashes. 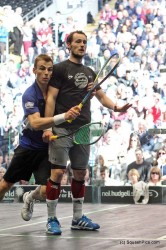 Second seed Matthew’s hopes of a historic fourth British Open title were dashed by fourth-seeded Frenchman Gregory Gaultier in a fiery encounter in the opening semi-final.

Defending champion Matthew went on the attack in the first game, playing hard and fast and trying to dominate his opponent. The 32-year-old from Sheffield quickly took the score to 4-0 and, looking to make light work of the Frenchman, moved the game on to 8-1.

But Gaultier (pictured in Hull action with Matthew) fought back, winning a massive seven points in a row to level the match. Nine-all followed – but home hero Matthew managed to take the last two points to open up a first game lead.

By the second game, however, the Frenchman was setting the pace of the match and had Matthew on the run. The world No3 from Aix-en-Provence dominated from the off, going 4-0 up quickly, before progressing to 7-2. Although Matthew clawed back a couple of points, the inevitable was soon realised with Gaultier drawing level. 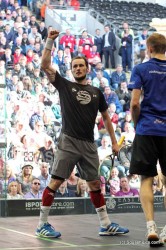 Gaultier again dominated early in the third. Matthew fought back with some strong rallies but always missed out on the point. Gaultier reached game ball at 11-2 – and although Matthew pulled one point back, the game belonged to the Frenchman who won 11-3.

With the chance of a place in the final slipping away, Matthew fought tooth and nail to get back into the match. The two players matched each other point-for-point early in the game – but then Gaultier again started to edge away to make it 7-4. Matthew pulled back to 7-6 but from there on the Frenchman dominated.

A controversial video review at match ball looked to offer the Brit a lifeline but a rally later Matthew was sent crashing out of the championship, Gaultier winning 9-11, 11-7, 11-3, 11-6 in 70 minutes.

“I really wanted to do well at the British Open and was well prepared,” said the elated Frenchman later. “I was happy with how I played. I wanted to get back up the rankings and the only way to do that is to win matches.”

The win takes Gaultier into his 51st PSA Tour final – and sees the 30-year-old former world number one back in the British Open climax for the first time since becoming France’s first winner of the title in 2007. 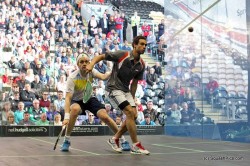 The second semi-final was a repeat of last year’s at the London O2 Arena – with Pontefract’s Willstrop taking on Egypt’s world number one Ramy Ashour.

In a high-quality encounter, Ashour continued his formidable form, treating the crowd to an array of outrageous flicks, drops and nicks that literally made the capacity crowd audience whoop in awe.

It was less than 24 hours earlier that Willstrop had staged the comeback of the tournament to beat Australian Cameron Pilley in a tense five-game 107-minute clash.

With Willstrop clearly needing time to refocus, the first game was all Ashour as the Egyptian raced to a 8-0 lead – with every attacking shot he tried landing perfectly in the nick, much to the dismay of the local hero. 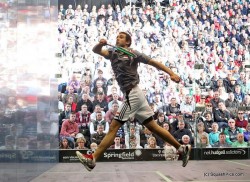 The Yorkshireman even joked with the world number one after an astonishing point saw the Egyptian casually take the ball from almost between his legs and land it in the nick. First game to the favourite after only six minutes.

In the second, the two went point for point to eight-all – the Englishman beginning to move Ashour away from the middle of the court, stretching the game out to his advantage. At crucial stages of the game, however, Ashour was patient to attack – showcasing not only his short game but finding the perfect length to take the second 11-9.

A large contingent from Willstrop’s home club, who had made the 40-minute journey down the M62 from Pontefract, did their best to lift the three-time British Open runner up. 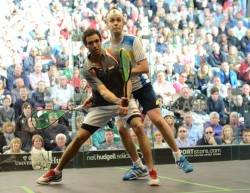 But it wasn’t to be for the 29-year-old who, despite having three game balls in the third, eventually tinned Ashour’s first match-ball to see the Egyptian move into the final for the second year in a row.

The win saw Ashour extend his unbeaten Tour run – since losing last year’s final to Matthew – to a remarkable 40 matches!

When asked what it meant to him to be in the British Open final, Ashour said: “It means a lot – but the pressure is still on. Greg is more than on fire. He’s almost a rocket! I was watching and he’s playing brilliantly.

“I have to keep pushing myself and still remember that the tournament is still on, despite the very good match with James today. It might have taken a lot out of me but I’ll still push and I’ll still give it my all and I’m very proud to be in it. 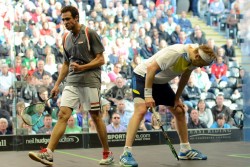 “I had a feeling that James might be a little tired from yesterday, so had to get in and play shots before he did,” added Ashour, now in the 46th Tour final of his career. “Because if I get caught in his trap, I’m screwed basically! He’s a great player and a great character on and off court and it’s a great pleasure to play against him.

“The British Open is a prestigious tournament, and we should give thanks to Dr Allam for putting the event back on the map. It’s great to have it back because it was greatly missed.

“I’ll be more than happy if I can win it – but I have a big mountain to climb first.” 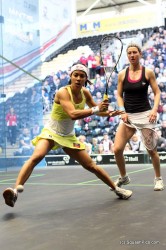 The top two seeds will contest the final of the Allam British Open 2013 as Nicol David and Laura Massaromoved past their semi-final opposition at the KC Stadium in Hull.

World No.1 David played first as play returned to the Hull City venue after rain disrupted quarter-finals day on Friday.  She faced fourth seed Alison Waters, and had it all to do after the Englishwoman took the opening 4-points of the match.

Last year’s British Open champion came back strongly however, lightening quick and hitting a good length to shut her opponent out completely.  Waters began to rely on hitting outright winners to stay in the game, but under increasing pressure her error count rose to David’s advantage. 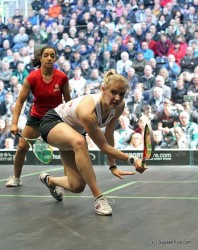 Similar scorelines in all three games saw the Malaysian through to the final, but the home crowd were given the opportunity to celebrate as second seeded Yorkshire-woman Laura Massaro defeated close rival Raneem El Weleily to set-up a mouth-watering final prospect.

Massaro took a while to get into a working rhythm as El Weleily began the contest with her typically attacking style.  Patience paid off though, having lost the opening game she controlled the following two, working line and length to deny the Egyptian the opportunity to attack.

El Weleily changed her strategy in the fourth, refusing to hunt the attacking shot and content to play Massaro’s game and wait of her chance to win points.  It resulted in a closer game, but momentum was with the home favourite who was determined to see out the contest and reach her fourth successive final of a World Series event.