British Open semi-finals day at a packed O2 Arena saw the world’s dominant woman player go through to a final where she will face the youngest ever women’s finalist, and an astonishing men’s match producing another Egyptian first-time finalist who will face England’s defending champion …

You can’t keep a good Ramy down 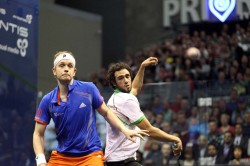 Ramy Ashour and James Willstrop played an astonishing match in the first men’s semi-final, which had everything and left the capacity O2 crowd standing in applause at the end.

World number one Willstrop took the first, keeping things calm and managing to keep a lid on Ashour’s attacking instincts. On occasional rallies Ashour would manage to break free, increase the pace and throw in some ridiculous winners and retrievals, sprinting from one corner of the court to the opposite corner to smash away the dropshot Willstrop had played off the Egyptian’s boast.

It was close, but Willstrop did manage to contain his opponent in that game, but not in the next two as Ashour unleashed his full range of weaponry to take the lead. 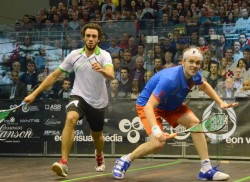 He threatened to run away with the fourth too, but again Jamaes just about managed to keep it under some sort of control, and even led 6-4, admonishing himself for the occasional loose shot that let Ramy unload again.

But in the end there’s no containing Ramy when he’s in this mood or this form, those flashing winners, sublime drops into the nicks, astonishing dives and recovery shots will beat anyone if they’re on song.

At the end of the fourth game James even had to resort to diving himself, doing a sort of dolphin flip with half twist into the back corner. He didn’t get the ball back though, and that brought up match ball for Ramy, which he converted at the first attempt with a brilliant winner, and the applause began.

“It’s just about putting away my demons,” explained the winner, “it’s hard to handle an atmosphere like this, you have to be able to take it all in and play your best in front of these great people. James is a great number one, I had to do something special to get close to him …”

Matthew back in the final 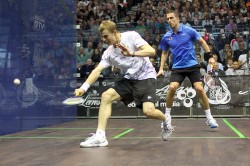 If the second men’s semi-final was a little anti-climactic compared to the first, that’s to take nothing away from the level of performance turned in by defending champion Nick Matthew. He took charge of the match from the outset, and try as he might Peter Barker couldn’t repeat last night’s heroics which saw hime put out second seed and former champion Gregory Gaultier. 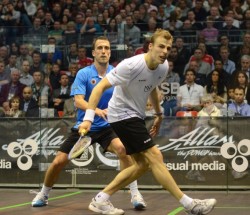 So Matthew will face Ramy Ashour in a repeat of their El Gouna final last month, which Ashour won 3/1. For the Englishman a third British Open title is the incentive, for Ashour a first is incentive enough. For the crowd, a treat is surely in store.

“I was pleased with the way I started,” said Matthew. “I knew Peter had a hard match last night so I wanted to get on top early and I managed to do that.

“Last time was a long time ago, 2009, so it doesn’t really feel like I’m defending champion, but it’s great that Dr Allam and everyone involved has got this great event back on the calendar, and I’m looking forward to playing the final tomorrow in such a tremendous venue and atmosphere.”

Sherbini is the youngest finalist 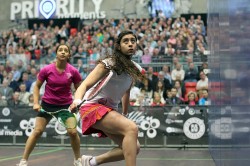 One of them was sure to become the first-ever Egyptian women’s finalist, and it was the 16-year-old Shernini who took the first step, taking a nip and tuck first game 14/12. A five minute delay as Nour had the knee that started bleeding yesterday bandaged again, and El Weleily, 23, started the second well and struck back to level 11/7. 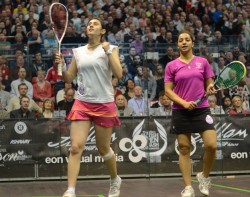 Sherbini raced through the third 11/4 in just four minutes, firing in those drops and volley drops she loves so much.

The fourth was close all the way, but from 9-all two unforced errors came from Raneem’s racket and Sherbini was in the final.

“I’m so tired after that match,” said El Sherbini. “There was a lot of pressure but I just had to relax and try to play my game, and I managed to feel very relaxed on court, my game was working well. “Now I’ll just try to believe I’e really won, enjoy the function tonight and get ready for the final tomorrow …

David through to a fifth final 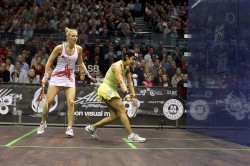 Sherbini’s opponent in the final will be in familiar territory, after top seed Nicol David beat the last remaining English hope Laura Massaro in straight games to move into her fifth British Open final.

The Malaysian seemed to be able to control the pace of her opponent and the match, taking the first game with a run of points from 3-all. The second game was much more contested, although it was still the World Champion who seemed to be dictating the pace of the game, and this time she pulled clear from 5-all to double her advantage 11/9. 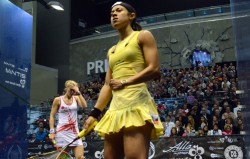 Nicol was in charge from the outset of the third, Laura did a few “c’mon” self-admonishments, but to no avail as Nicol kept it tight, kept it controlled, and closed it out 11/4.

“At the start I was a bit nervous,” explained David. “But I managed to stay focused the whole way through and played a good game of squash. I think I played better in each game, feeding off the atmosphere, but she doesn’t ever stop and I really had to hang in during the second.”