Englishman James Willstrop put in a brilliant performance of controlled squash to demolish former world number one Amr Shabana of Egypt in today’s (Friday) quarter-finals of the CSR Viridian Australian Open in Canberra.

A day after beating another ex number one David Palmer in the $142,500 PSA World Tour event – the fourth PSA Super Series championship of the year – sixth seed Willstrop hardly made an error as he raced to an 11-4, 11-5, 11-7 win over the four times world champion from Cairo.

The upset leads Willstrop to a semi-final against fellow countryman and current world number one Nick Matthew – and the certainty of an English finalist on Sunday.

“I just tried to think it’s a different day,” Willstrop said after his third win over Shabana, the No3 seed, this year.  “I tried to get ready the same as yesterday – just because I won yesterday, that’s gone and I don’t think about that any more.

“But I have to be absolutely on my game tomorrow and, if I am, I can win the tournament,” added the former world No2 from Leeds in Yorkshire. 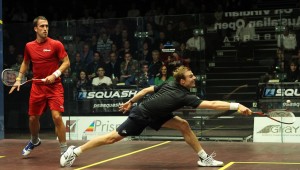 Matthew, also a Yorkshireman, earlier survived a brutal examination from countryman Peter Barker to move into the semi-finals.

The left-hander from London opened brilliantly and raced away with the first game 11-4, but at 5-5 in the second he went off the boil and allowed Matthew to win the next six points to even the match.

The England teammates delighted the big crowd at Canberra’s Royal Theatre with their superb all-court games, Matthew just getting home on the back of some unforced errors at crucial times from Barker, who had not taken a game off his opponent for the past 18 months.

“I knew he wanted this match and would come out to play,” Matthew said.  “The last few times he has played me he has come off the back of some tough matches or he has been carrying a niggle so he could not do himself justice.”

France’s Gregory Gaultier says he is back to his best and enjoying his squash once more after downing fourth seed Karim Darwish 11-3, 11-4, 8-11, 11-7 in a minor upset in evening session on the all-glass court at the Royal Theatre.

Fifth seed Gaultier reached the world number one ranking for a month in November last year, but then immediately hit a form slump and quickly dropped out of the top five.

However the 27-year-old from Aix-en-Provence said that, after training hard over the season break and talking about his problems with his coach and family, he was now approaching the sport with a new attitude.

“I went through a tough period and suffered from depression,” he said.  “I didn’t enjoy playing at all but now I have come back want to do the best I can.

“I believe a career is short and I am already 27.  I haven’t reached my goals so I decided over the last few months that I would give it everything.” 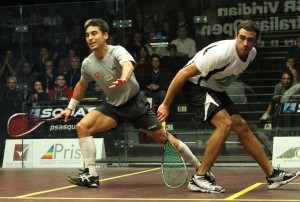 Gaultier will play the mercurial Ramy Ashour, who disposed of Thierry Lincou 11-7, 11-6, 11-2 in another Franco-Egyptian clash between two former world number ones.

The second seeded Ashour was simply devastating, giving Lincou no chance in one of the most impressive displays of the tournament.

The winner takes on either Nick Matthew or James Willstrop in Sunday’s final.

Peter Barker’s defeat earlier in the day ensures that the top eight players in the PSA Super Series rankings on the eve of the Australian Open will retain their places – though the final order may change depending on the outcome of the semi-finals and final.