In a first for the championship, three Englishmen will contest the semi-finals of the $327,500 Saudi PSA World OpenSquash Championship after Nick Matthew, James Willstrop and Peter Barker came through the quarter-finals of the richest PSA World Tour event of all-time at Sunset Beach Resort in the Saudi Arabian city of Al-Khobar.

The Englishman had maintained an advantage throughout the 14-minute first game, but an equally-determined Darwish fought back to take the second with a run of five points from six-all. 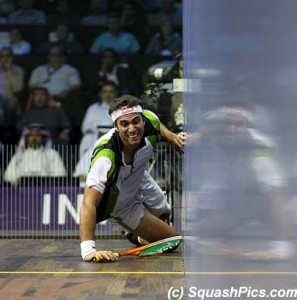 But with Darwish leading 7-6 in the third, the Egyptian slipped and took an injury timeout to receive treatment to the back of his left thigh.

After the allotted three minutes had elapsed, the 29-year-old from Cairo went back on court – but, before a ball had been struck, offered his hand in defeat.

“I thought I was playing well and had a good chance to go through,” explained a subdued eighth seed Barker afterwards. “But no-one ever wants to do it like that.

“It’s a very physical game and when there’s a bit of sweat on the court that can happen to anyone. I really feel for Karim and wish him a speedy recovery.

“I’m in the semi-finals of the world open, and I’ll get to play Shorbagy or James. If it’s James, then I’ve never beaten him – what better time to do it!”

It was a bitter blow for the in-form Darwish who arrived in Saudi after success in last month’s Qatar Classic and October’sEl Gouna International Open in Egypt – and was runner-up in the 2008 World Open. 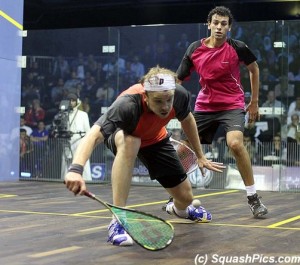 Barker’s opponent will be Willstrop who, in the final match of the day, defeated rising Egyptian star Mohamed El Shorbagy to ensure that three Englishmen will contest the World Open semi-finals for the first time in the event’s 34-year history.

It was a closely-contested affair in which the pair went point for point for three games – the 19-year-old Egyptian holding a single point advantage in each of the three games, but Willstrop finding the necessary impetus to finish each off.

The penultimate rally was one of the best of the tournament, 27-year-old Willstrop moving his opponent from corner to corner before delicately volley-dropping Shorbagy’s boast with the Egyptian nowhere in sight.

Then, to finish it off, Willstrop scored with a mishit at the front of the court!

Willstrop was full of praise for his opponent: “All credit to him, he came out firing, stuck in and his intensity never dropped – good stuff for a 19-year-old. When I was down towards the end of the games he started getting confidence in his shots and I had to dig in – the extra seven or eight years experience probably helped there.”

England team-mates Willstrop and Barker have contested countless matches throughout their distinguished junior, and now senior, careers. But their PSA Tour record shows Willstrop 10/0 ahead.

“I’m not thinking about my record against Peter, he’s a good man and I know we’ll have a good clean match,” said Willstrop. “We’ve played each other a lot and played some tough matches together for England, so there’s a lot of respect between us.”

Distinguished Egyptian Amr Shabana stands in the way of the event’s first English champion. Defending champion and winner of the title a total of four times, Shabana eased his way into the semis for the sixth time in a row after beating French rival Gregory Gaultier.

But, again it was a thigh injury that caused fifth seed Gaultier to concede the match prematurely after winning the opening game.

It was early in the third game that the Frenchman pulled up, stretching forward, and took a short injury break. On the resumption, he quickly went 4-0 down, and fell to the floor clutching his thigh before conceding.

Shabana will face Nick Matthew, the 30-year-old from Sheffield who is seeded to become England’s first ever world champion. 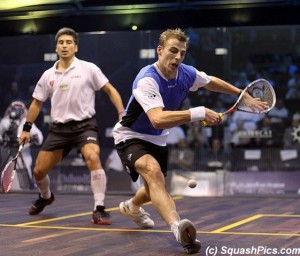 Matthew faced Thierry Lincou, the seventh-seeded Frenchman who was champion in 2004. Matthew took the first game and Lincou led briefly in the second. But the Englishman soon resumed control before charging to his 11-3, 11-5, 11-2 victory in 38 minutes.

“I was focused, but he was even more focused,” said Lincou. “I didn’t play tight enough and he took advantage of all my loose balls, I just couldn’t do anything to get him off the ‘T’.”

The 34-year-old Frenchman, who has played in each event since attempting to qualify in 1997, did not rule out future World Opens though: “I’m playing well enough to reach the quarters, but maybe the last four is a bit of a step up. If I can keep playing like this there’s no reason I can’t play more World Opens.”