Barker will face world champion Nick Matthew, the top seed who received a walk-over into the climax of the PSA World Tour International 50 event at Canary Wharf when his opponent Gregory Gaultier quit through illness with the score at one game each.

Matthew admitted he felt deflated at winning in such an unfortunate fashion – but No4 seed Barker was delighted to break his duck in front of a full-house crowd at the spectacular East Wintergarden venue in his home city. 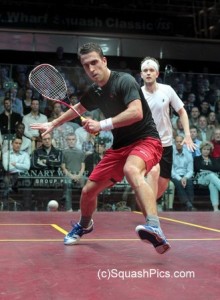 The 27-year-old Londoner had lost to world No4 Willstrop on every occasion they had played throughout their junior and professional careers, so achieving a maiden victory in front of his home crowd tasted even sweeter.

“I had a game plan tonight, but I have had a game plan against James since the age of ten and I’m very pleased that it finally paid off, 17 years later,” Barker told event MC Alan Thatcher.

As his mother cried tears of joy in the front row, Barker showed his respect for his opponent by saying: “I have played James for years, ever since our junior days, and never beaten him, so tonight is very special, especially as it’s here in London, and at such a wonderful venue with a sell-out crowd every night.

“James is not only a great squash player but a great guy and I knew it would require a massive effort to beat him.”

Barker, now celebrating his 20th PSA Tour final appearance, revealed that he will now have to cancel plans to travel to France with his fiancee to celebrate his future mother-in-law’s 60th birthday.

He added: “It’s a shame to miss out on a lovely trip to Paris but I hope my girlfriend appreciates the fact that I have to go back to work tomorrow.”

Barker was apologetic after breaking his racket on his leg after a momentous tiebreak at the end of the first game. “That was a mixture of adrenalin and stupidity,” he said.

“I felt I should have won that first game and I had to quickly refocus for the second.”

Barker came out for the second with all guns blazing, and powered through 11-1 as Willstrop, a three-time Canary Wharf champion, began to look jaded.

The 6ft 4in Yorkshireman responded positively to lead 7-5 in the third game, but Barker hit back to win six points in a row to win it 11-7.

From 3-3 in the fourth game, Barker pushed ahead to 8-5. Again Willstrop fought back to level at 8-8, but the effort took its toll and Barker reeled off the final three points, with Willstrop conceding defeat with a weak shot down the middle of the court to concede a penalty point. 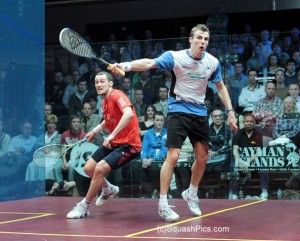 Third-seeded Frenchman Gaultier was taken to hospital for a check-up after retiring against Matthew with a mystery virus.

Astonishingly, he had begun the match in superb style, moving ahead from 5-5 to win the opening game 11-5.

However, at 4-4 in the second game he seemed to be in obvious distress as Matthew took control and picked up a string of points in quick succession to win it 11-5.

Gaultier complained of feeling faint at courtside between games and, after being treated by a doctor and paramedics, he was taken to hospital for checks.

Matthew said: “Nobody likes to win a match like that. Apparently Greg was up all night feeling unwell so I find it amazing that he started the match playing such great squash. He made me look very average at times.

“At the moment I can’t begin to think about the final because my thoughts are with Greg. I just hope he’s OK.”

The unlucky Gaultier had only recently returned to the PSA World Tour after suffering a hamstring injury in the World Open in Saudi Arabia in December.