Reigning champion James Willstrop and former champion Ramy Ashour set up a mouth-watering semi-final clash in the 2011 JP Morgan Tournament of Champions after becoming the first two players to come through the last eight of the PSA World Series squash event at Grand Central Terminal in New York.

First up on the iconic glass court was top seed Ramy Ashour against eighth seed David Palmer. Going into the night’s match, Ashour enjoyed a 9-1 winning record against the 34-year-old Australian. However, with the Egyptian having been off his game at year end due to a hamstring injury, and Palmer playing superb squash in the opening rounds of play, there was a sense of possibility that perhaps Palmer might register the tournament’s first real upset. 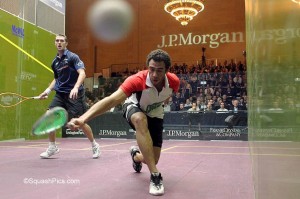 The first game saw the lead exchanging hands on almost every point until veteran Palmer pulled ahead at 10-9 and then won the next point to take an early match lead.

With that positive opening gambit, the sense of a possible upset was heightened for the crowd, but not for Ashour. “Even when I was losing that first game, I was feeling good on the court,” Ashour said after the match. “Maybe I was bit concerned, but it made me push myself harder.”

The extra Ashour effort in subsequent games was immediately apparent; in games two and three Ashour never relinquished the lead. The US-based Aussie got himself back in the mix early in game four, first taking a 3-1 lead and then a 6-4 edge; one of those leading points was awarded to Palmer off a disciplinary stroke called against the animated Ashour when he stepped off court at 3-4 to have a discussion with the referee.

After the match, the voluble Ashour shared his enthusiasm for his progress in the championships. “It is so great to be in the semis after missing two big tournaments at the end of last year because of injuries,” he said. “I am getting better day by day, but it is not easy.

“The injuries are still in my mind – those are my demons,” continued the favourite. “I used to be thinking of only two things on court – where and how I am going to hit a shot. Now I am thinking of three things because I am also thinking about my body.” 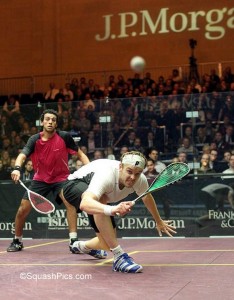 Ashour’s semi-final challenger will be none other than Englishman James Willstrop, who defeated rising Egyptian starMohamed El Shorbagy in three straight games. In classic Egyptian style, the 20-year-old challenger, already a top ten player, came out of the starting blocks at full shooting speed to register an opening 5-0 lead. Willstrop countered with well-paced wide cross courts to fend off his challenger and edge out to a 6-5 lead, and then win the game 11-9.

The outcome of the second game was never in doubt as Willstrop led from start to finish. Although Willstrop also held the lead all the way through the third, El Shorbagy looked like he might extend the match when he tied the score at seven-all after having been down 4-7. But the 20-year-old seventh seed tinned the ball 8-10 down, sending Willstrop into the last four.

Last year was the Yorkshireman’s turn; he defeated Ashour in the finals to take the champion’s crown. When asked if he looked forward to playing Ashour, the usually taciturn Willstrop replied with Ashour-like enthusiasm: “I do, I do, I do,” he said. “Ramy is one of the great racquet players to ever hit the ball. Right now I feel I am on a par with him and could beat him on any given day. Our matches always offer the possibility of being quite exciting and entertaining. Plus I really like the guy.”