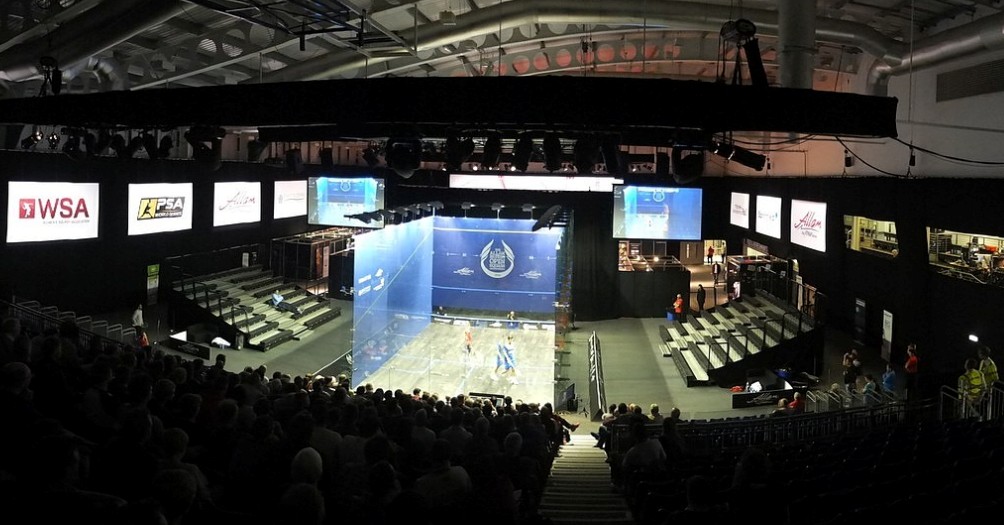 The PSA and WSA World Series Allam British Open is under way in Hull, with a number of marathon matches and significant home wins in round two part one … 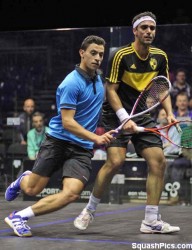 Egyptian qualifier Fares Dessouki will compete in the quarter-finals of a PSA World Series event for the first time in his career after he pulled off arguably the biggest upset of the tournament so far to take out World No.9 Karim Darwish 3-2 at the 2014 Allam British Squash Open.

Dessouki, the 19-year-old World No.55, was a late entry into the competition as the beneficiary of Tom Richards’s withdrawal due to injury but the youngster showed no sign of nerves as stunned his experienced compatriot, racing into an early 2-0 lead before holding on to eek out a win despite a late surge from the former World No.1.

“This is the biggest win in my career,” said Dessouki.

“To beat a legend like Karim Darwish is huge. I dreamed of these moments when I was young and I’m very happy that it has happened.

“My focus was up and down in the fifth game and I was very lucky because he is a player who can finish a match from any situation so I’m very happy with this win.” 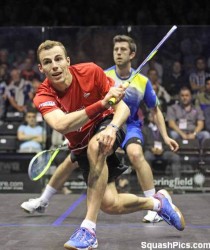 Matthew, who disposed another Englishman, Joe Lee, in the first round on Monday remains on course to win the prestigious ‘Wimbledon of Squash’ for the fourth time, a win which would see him equal the record of David Palmer, Azam Khan and Mahmoud Karim.

“It was a huge relief to get the win tonight,” said Matthew following the 76-minute battle.

“It was a bit of a topsy turvey match. We normally have very attritional matches but it was a dead court today and we both adapted and fortunately I got the better start in the fifth game and just saw it through.”

Home interest in the women’s semi-finals of the Allam British Open Squash Championship is already assured after No2 seed Laura Massaro, the defending champion from Preston, and Cheshire’s unseeded Sarah Kippax today came through contrasting second round matches in the Women’s Squash Association (WSA) World Series Platinum event at The Sports Arena in Hull. 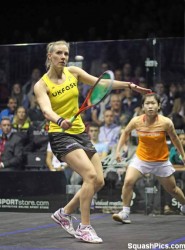 Massaro cruised to an 11-7, 11-4, 11-6 win over Annie Au, the No9 seed from Hong Kong to whom she had lost three times in their previous six meetings.

“To say I’m chuffed to get through is an understatement,” said the 30-year-old who made history in March by becoming the first Englishwoman to hold both the World and British Open titles simultaneously. “Although I can get quite fiery, I was even more fired up tonight. I really wanted to win and I had to be at the top of my game as Annie is such a talented player.

“It’s really great to play in front of a home crowd as they really get behind you. Of course I’d like to win another one but I’m taking each round as it comes,” added world No2 Massaro.

The title-holder will line up against England team-mate Kippax in Friday’s quarter-finals. The Halifax-based 31-year-old maintained her 100% career record against Guyana star Nicolette Fernandes – but her sixth successive win since March 2004 was the first to go the full distance, with Kippax finally emerging victorious 15-17, 11-7, 13-15, 11-3, 12-10 after 84 minutes. 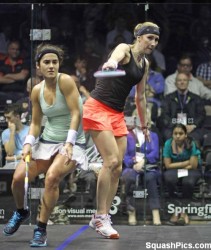 “It was a long one!” conceded Kippax after reaching the British Open quarter-finals for the first time at her tenth attempt. “The first game seemed to go on forever but it was a truly great match. It’s my first ever quarter final in the event, so I’m thrilled.

“It’s even nicer to play well in your home country. My sister and dad are both here as well as my husband so I’m just pleased to do well in front of them too.”

Kippax later told her Twitter followers: “I’m incredibly privileged to have been involved in one heck of a battle vs @NicoletteGuyana (complete warrior) on an amazing stage @BOSquash.”

WSA President Kasey Brown was denied a second successive quarter-final berth after losing to Egypt’s No3 seedRaneem El Welily. The world No3 from Cairo was in blistering form as she despatched Australian Brown, the 14th seed, 11-5, 11-6, 11-3 to make the last eight for the third year in a row.

The fairy-tale run of England’s unseeded Emma Beddoes also came to an end today – but the gutsy 28-year-old, who ousted Egypt’s world No7 Nour El Sherbini in the biggest upset of the first round, staged a mighty come-back from two games down to level the match against seventh seed Low Wee Wern.