Omneya Abdel Kawy provided the dream climax to the $147,000 Soho Square Women’s World Open Squash Championship in the Egyptian Red Sea resort of Soho Square at Sharm El Sheikh by becoming the first Egyptian to reach a World Open final in the event’s maiden staging in her home country.

A beaten quarter-finalist for the past five year, the 25-year-old from Cairo finally secured her place in the last four of the richest ever WISPA World Tour squash event when she defeated rising Australian star Kasey Brown.

But awaiting the fourth seed in the next round was event giant-killer Camille Serme, the No9 seed from Paris who had become France’s first ever semi-finalist after stunning England’s No2 seed Jenny Duncalf. 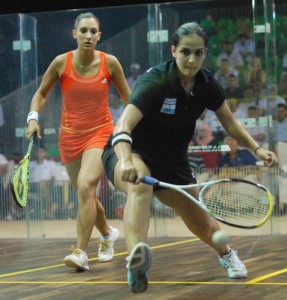 The Egyptian favourite was in control for most of the match, with Serme at times looking tired, perhaps after her exertions in the quarter-finals. Although the world No9 never let Abdel Kawy streak ahead, in the first two games she was always playing catch-up – and the crowd favourite took advantage to take a two game lead.

Serme made a good start to the third, leading 3-0 and 5-3, but Kawy struck back, and once she had levelled at five-all the result was never in doubt.

“It was the first time I had even been in the World Open semi-final, and I was really focussed,” Abdel Kawy told the official website www.sohosquareworldopen.com/2010 after notching up her 25th WISPA Tour final appearance.

“I put the pressure on myself to deliver and it worked. 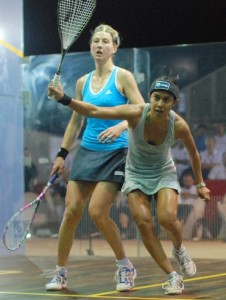 In the final, Abdel Kawy will face defending champion Nicol David, the world number one from Malaysia who ended the English challenge with a three-game defeat of third seed Alison Waters.

Waters maintained a slight lead for most of the first game – but, just as in their two previous meetings this year in theMalaysian Open and Singapore Open, was unable to finish it off as David took a 1/0 lead.

It was downhill thereafter for the top seed as David swept through the second, and ultimately took the third to record the 14-12, 11-2, 11-6 win, and her 16th successive victory over the Londoner.

“I am just glad to be in the final,” said David. “This was definitely a big hurdle to get over. Against Alison I always have to play my best game. It was a difficult match, even though the score doesn’t show it.

“It’s sure to be a tough match with Omneya like it always is,” added the 27-year-old from Penang. “I’ll have to bring everything out of my bag!”