With fully half the matches sing the lower-ranked player triumph it was a day of quarter-final upsets at the Hong Kong Squash Centre, and a day for revenge too …

Well, what a start to quarter-finals day as Hong Kong’s own Annie Au continued the trend of upsets in the women’s event as she came from 2/1 down to beat third seed Rachael Grinham to delight the packed crowd at the Hong Kong Squash Centre.

The first two games were close, but when Grinham eased through the third the crowd looked worried. Their fears were allayed as Au took a lead in the fourth, their hopes raised when she did the same in the fifth, and were finally realised as she ran away with it in the end. 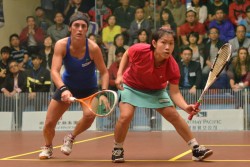 “I felt quite comfortable when I was getting her into rallies in the second and the third,” said Grinham, “but from the end of the fourth and the fifth she was chopping the ball away and I just couldn’t get any rallies going. It was frustrating, and the harder you try the worse it gets when it’s like that – I was still feeling fresh at the end.”

Annie was understandably happy: “Very happy, and excited for tomorrow! I was a bit nervous at the end of the match, I tried to not think about it being the last game, just tried to win a point at a time.” 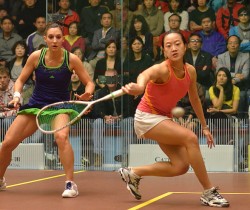 It seemed that whoever got the early lead won the game – although Camille led the second 10/4 and only took it 11/9 – and although the Frenchwoman threatened to come back a couple of times in the decider, unforced errors proved her undoing. It was a crisp winner though that took the Malaysian into the semis.

“I knew it was going to be tough, because in the worlds, she was not in it in the first, but after, every game was a battle. Today, she was much quicker into the match,” said Wee Wern. “What made the difference I think today, was that I was just a bit more patient at the end of each game.” 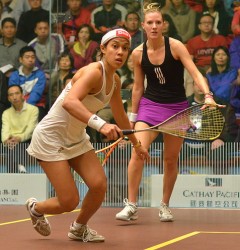 Nicol David, on the other hand, has appeared in each of the last six Hong Kong finals, and she’s won them all. The newly crowned six-time world champion stayed on course with her 33rd Hong Kong win in a row as she too gained a measure of revenge, beating England’s Laura Massaro, who had beaten her in two of three meetings this year, 11/5, 11/8, 6/11, 11/6.

Massaro mounted a too-late comeback in the second but kept that momentum to pull a game back in the third, but Nicol regrouped and looked a solid as ever as she closed the match out in the fourth.

“I came out so fast in the first two, I just dropped a little in the third and she found some good shots and played well to take it,” explained David. “I knew I had to come out strong in the fourth and my lengths and volleys were working well.”

“I know there might be some bad weather tomorrow but it would be great to play at the harbour again, it has so many good memories for me. But it’s the semi-final, we just need a court to play on!” 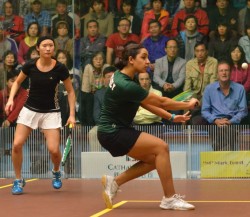 The unlikely dream of four Asian and two Hong Kong semi-finalists didn’t come about, but it wasn’t down to a lack of effort on the part of Joey Chan or the crowd, that’s for sure. Raneem El Weleily weathered the early storm, and from 5/7 down in the first took 18 of the next 21 points to establish a commanding-looking two game lead.

But a few typical errors in the third let Joey back in, and the left-hander needed no encouragement – although she got plenty – as she levelled the match with some scintillating and determined play.

Raneem was never behind in the decider, but never far enough ahead to be comfortable, so when Joey called her own ball out at 10/8 the Egyptian was both grateful and relieved.

“I couldn’t believe she called that out when three refs missed it, all credit to her for that,” said Raneem. “I felt good at the start then played a few poor shots and let her back into it. I was nervous in the third and fourth, I was trying to tell myself the crowd were behind me too but it was hard!

“In the fifth it was already two-all so I had nothing left to lose and I relaxed more. It’s great to play squash in front of a crowd like that whether they’re supporting you or your opponent, and I’m really looking forward to the harbour tomorrow. 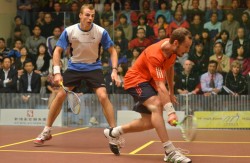 Less than two weeks after losing to Nick Matthew in the World Open final in Rotterdam, Frenchman Gregory Gaultierearned his revenge in Hong Kong today by upsetting the world number one from England in a 90-minute marathon in the quarter-finals of the Cathay Pacific Sun Hung Kai Financial Hong Kong Open, the seventh PSA World Seriessquash event of the year.

While Gaultier was 9-7 ahead in their Tour career head-to-head tally, Matthew had won their three most recent encounters – and looked in commanding form today as he took the opening game.

The fifth seed came back to take the second but again Matthew seemed to have the upper-hand as he built up a 9-4 lead in the third.

But the dynamic of the match changed at that point as the Frenchman mounted a massive comeback to take the game after a tie-break – before romping ahead in the fourth and ultimately closing out the match 7-11, 11-9, 13-11, 11-5.

“I think we were both tired today, everybody knows that we were playing in the final of the Worlds last week, and that I lost,” Gaultier told www.squashsite.com afterwards. “So today, I was dying for revenge.

“In the third, it was a toss of a coin! I was 9-4 down, and I thought, well, win or lose, I’m just going to make him work for it. And point by point, I dug in. At 7-8, 8-9, I realised that I could actually win that game. And of course, when I did, it was a great advantage for me, 2/1 up,” continued the 28-year-old from Aix-en-Provence – now just one match away from his fifth final appearance in a row.

The world No5 will now play life-long European rival James Willstrop, the world No3 from England who was gifted his place in the semi-finals when his England team-mate opponent Peter Barker was forced to withdraw with an injury early in the third game.

“I really feel for him,” said Willstrop after his 27-minute encounter. “But you can’t take any risks when it comes to the knee and you can’t play squash if you can’t run.”

Gaultier is aware of the advantage Willstrop has over him after their contrasting quarter-final clashes: “I’ve watched James play today, he looks sharp. So now, no celebration, just my normal routine, to get ready for tomorrow. I know James didn’t have a long match as Peter got injured, so it will be a bit of a challenge. But then again, I love challenges!” 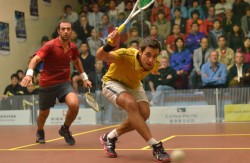 There was a further significant upset in the other half of the draw when Malaysia’s Mohd Azlan Iskandar became the only unseeded player to make the semi-finals after beating Egypt’s fourth seed and four-time Hong Kong Open champion Amr Shabana 11-9, 11-5, 11-6.

The 29-year-old from Kuala Lumpur has enjoyed a fine run of form in Hong Kong, which began with a four-game win over Egypt’s seventh seed Mohamed El Shorbagy. Iskandar is now in his first PSA World Series semi-final of the year – and certain to finish in the top eight of the 2011 World Series standings after the completion of the event.

“I don’t think Shabana was at his best today, but I’ll take it,” said the delighted winner. “My first semi in Hong Kong!”

“Overall, happy with my performance,” said the 30-year-old from Cairo, now in his third successive Hong Kong semi-final. “Last time I played Azlan was in the US Open, I was not 100% at my best, but normally, we have great matches. He is a good mate and a fair player. I’m looking forward to it.”

Semi-finals commence the Cultural Centre on Victoria Harbour at 18.00 on Saturday, weather permitting – adverse forecasts mean that a decision will be taken at 15.00 as to whether play can go ahead there, otherwise matches will be played at Hong Kong Squash Centre.