Clearly in considerable pain, Egypt’s former champion Ramy Ashour was forced to concede his match in today’s quarter-finals of the PSA World Open to allow sixth-seeded Frenchman Gregory Gaultier through to his fourth semi-final in six years at the New Luxor Theatre in Rotterdam.

There was no hint of what was to come in a fast and attacking evenly-contested first game. To the obvious delight of the crowd, Gaultier edged ahead to go one game up. But the second was entirely different as world No2 Ashour was suddenly almost immobile on the court – with the Frenchman serving the game out in just three minutes. 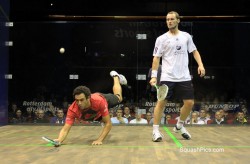 It was after just a single point in the third that the visibly distressed Egyptian, seemingly suffering with a hamstring injury, signalled the end of the match with the score at 11-8, 11-1, 1-0.

Gaultier moves on to face England’s James Willstrop after the fourth seed made up for failing to close out two match-balls in the third game by beating Egypt’s four-time world champion Amr Shabana 11-8, 11-2, 11-13, 11-1.

“To lead Shabana 2/0, you can get a little bit excited – but you don’t really know where his head’s at,” explained the 28-year-old from Leeds afterwards. “Obviously he’s been everywhere and there’s nothing he hasn’t done but you can’t carried away. I knew that physically from 2/0 it’s a massive boost.

“But massive credit to him to come out and do what he did. But I knew that if I kept pushing and pushing that I would get a few more chances.

“In Kuwait, we played in the World Open and he never relented physically at all. Everyone talks about his shots, but I think he’s very underrated for the physical part of his game. If he needs to rally he will do.

“It’s extremely pleasing to beat him in a big event. Everyone knows what a player he is. I’m feeling good and looking forward to the semis.”

A significant moment in the history of the sport came earlier in the day when, after losing to Egyptian rival Karim Darwish, illustrious Australian David Palmer confirmed his decision to retire. The 35-year-old from New South Wales, winner of the world title in 2002 and 2006, had reached his seventh quarter-final since 2002 after a gruelling 96-minute five-game victory over French rival Thierry Lincou.

“He was a little bit too good today,” said Palmer, whose career summary includes 27 PSA World Tour titles (including 4 British Opens) from 55 final appearances. “It was my first match on the glass unfortunately – it would have been nice to get an early match on here, just to get a feel for it. But I thought I played ok.

“I needed that first game – I needed a good start to try and create pressure. He didn’t make any mistakes today either, he didn’t give me anything. Every point I won I had to really earn – and I think he realised he had a good game plan against me.

“But overall I’m happy,” added the winner of six Commonwealth Games medals (two silver and four bronze) over three Games. “It’s a great way to finish my career and I’m happy to make another quarter final – and at 35, I don’t think it’s a bad effort!”

“I have no regrets in my career really. Apart from maybe a gold medal at the Commonwealth Games – that’s the only thing missing. Apart from that, I’m very proud of what I’ve achieved. Obviously I’ve left a few titles out there that I could have won, but I’ve won a couple of close ones too so it’s evened out over my career I think.”

“Pete has come on tremendously in the last year,” said the 31-year-old from Sheffield. “He’s been knocking on the door of the top for a while now. Maybe his injury this evening took it out of him a bit in the fourth, but we had three really tough games out there today.

“I didn’t play badly in the first – he was just playing a bit better than me. He was varying the pace and his length and width were immaculate. But I came through that patch mentally and was able to change things a bit and turn the screws on him at the end of the second.

“He didn’t then disappear in the third either – a year or two ago he’d have faded there, but he stuck in and showed the improvements that he’s made over the last year.

“Karim’s looking good – he’s not dropped a game yet, I don’t think, so I’ll have to play better tomorrow.”

Revenge on the menu for World Open Quarter-Final Winners 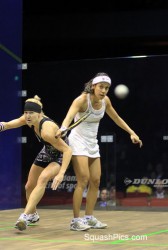 Nicol David’s bid to win the World Open a record sixth time carried her to a notable revenge and to the semi-finals in her adopted home country of The Netherlands. The Amsterdam-based Malaysian overcame Kasey Brown, the sixth-seeded Australian who beat her in the US Open in Philadelphia in August, by 11-7, 12-10, 11-4 in a match which, David said, felt like a five-setter – or “possibly a six-setter.” The pace was at times frenetic as both players looked to step forward to up the pace, but eventually it caught up with Brown as she faded in the third. Afterwards David said she thought the women’s game was improving all the time as players tried to close the gap on her.

“There’s always a challenge but every time you step up your game these girls are still coming at you,” she said. “But I look forward to every challenge.”

Her next one is a repeat of the 2009 final in Amsterdam against Natalie Grinham, who prevented an all-Malaysian semi-final by beating Low Wee Wern 11-7, 11-7, 11-5 – despite a cut to her nose requiring a ten-minute injury time out early in the third game. The former Australian turned Dutch international returned to the court knowing that if the bandage fell off and the bleeding restarted she would have to forfeit that game and, if it were repeated, the match. But Grinham won, as she had against the fourth-seeded Madeline Perry, because of the high quality of her front court game, and once again overcome the distraction of arriving with a pram carrying baby son Kieran and having to return to it afterwards.

The other semi-final will be between Samantha Teran, the first Mexican ever to reach a World Open semi-final, and Jenny Duncalf, the second seed from England. Duncalf had also gained revenge over an adversary as she downed British Champion Laura Massaro, her conqueror in the US Open. She played intelligent squash working the openings against an opponent who has had a fine 2011 and was one of the dark horses for the title. Teran secured her semi-final birth with a competent straight games victory over India’s Dipika Pallikal. The youngster appeared slightly over-awed by proceedings in the Luxor Theatre finding the tin with frustrating frequency and never really discovering the form that had seen her carve her way through the draw, however, that’s not to take anything away from Teran who was extremely business like in securing a first ever World Open semi-final.