In a sensational squash match between two of the great warriors of today’s game, Australia’s David Palmer emerged victorious over Frenchman Thierry Lincou after 96 minutes to claim a place in the quarter-finals of the PSA World Openin Rotterdam.

It was a match worthy of the two former champions – both of whom recently celebrated ten unbroken years in the world’s top ten. And both 35-year-olds were also making their 12th unbroken appearances in the event since 1998. 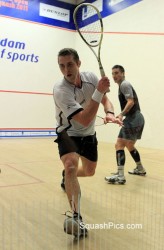 Palmer twice took the lead, but Lincou levelled and opened up an 8-5 advantage in the decider. But in a tense finish, it was Palmer who took the final few points as the crowd rose to applaud the pair.

“In the end I just wanted to go down swinging. I’ve lost the last couple of matches where I’ve been tentative. Being my last one, when I got back to seven-all, I just thought if it’s there for taking then I’m going to go for it. To be honest it was 50/50 at the end there. I went for some shots and caught him out. He got a bit tentative near the end there I think. 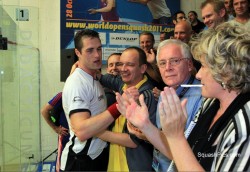 “Suddenly I relaxed and he tensed up a bit and obviously there were a couple of rallies there where we’re trying to clear each other. It’s one of those ones where ‘do you try to play it, or take the let or stroke?’ and I just came out better in those situations. It could easily have gone either way though.

“But, yes, I’m very happy to get through. My recent form hasn’t been great, but my goal was to come here and get to the quarters.

“It’s my last Word Open tournament and I’ve done that now so I’m very happy. It’s nice to obviously have Melinda and the girls watching. And my physio Pat with me who’s been with me all my career. I’ve a lot of good memories from this part of the world.”

The US-based Australian will now take on Egyptian rival Karim Darwish after the third seed needed only 31 minutes to see off unseeded Spaniard Borja Golan 11-9, 11-7, 11-1. 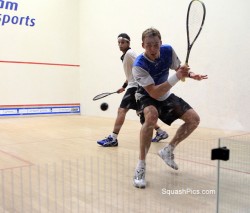 “It’s a bit of a blur right now,” said the 31-year-old from England who is bidding to become the first player to defend the title for 15 years. “It was one of the toughest matches I’ve had in a few years. I had to fight with every last drip of energy in my body, it was incredibly tough.

“You can’t give him enough credit. He was excellent and it was a brutal match, but i just managed to get a good start in the fifth match and it saw me through. The court was really warm and bouncy. We both went through patches where, I think we had drops in energy and then came back fighting – it was a very momentum based game.”

The event now moves to the city’s New Luxor Theatre where all matches will be played on an all-glass court. Matthew will meet England team-mate Peter Barker, who beat Cameron Pilley 11-7, 12-10, 11-4 to reduce his head-to-head deficit to the Australian to 2/3.

“I’m pleased to be off the plaster courts now and onto the glass court,” continued Matthew. “The glass court is where everyone wants to play. We have the extra day off, what with being in the top half of the draw, but the bottom half get an extra game on the glass court. I know which I’d prefer to have!

“The glass court is where squash is played at the very highest level of the game. Three rounds is a lot here, so I’m glad to get through. It’s almost like two separate tournaments, with two eight-man draws and then another eight-man draw following that at the New Luxor Theatre in two days time.

“I need to go away now, recover well and come out fighting because it’s going to get tougher and tougher.” 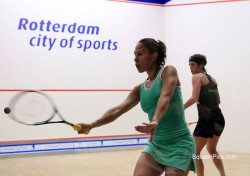 Day six of the World Open Squash 2011 at Rotterdam’s Victoria Squash opened up with the biggest upset yet as Mexico’s Samantha Teran, seeded fourteen, beat Rachael Grinham, the Australian who was champion in 2007 and was seeded three here. There was no sign of what was to come as Grinham eased through the first game, but Teran’s hard-hitting game seemed to neutralise Grinham’s slower, more measured game as the Mexican totally dominated the next two games, denying her attacking opportunities and catching her out with drops and boasts of her own.

As the tension grew Teran managed to stay ahead in the fourth, setting up match ball at after a long rally saw a Grinham lob sail out to take it to 10/8. Teran thought she had won it at the first attempt but was denied a stroke before Grinham levelled it as Teran then got a no-let looking for a cheap stroke. However, two rallies later an obvious stroke was given and the Mexican was through to the Quarter-finals.

Having caused upsets in the the previous round Dipika Pallikal and Kanzy El Dafrawy were both eyeing up unexpected place in the World Open quarter-finals. It was the higher-ranked Indian who took advantage, taking the lead in all three games and never letting her younger Egyptian get a real foothold in the game. It the early stages of the third it looked as though Kanzy’s more physical style was beginning to unsettle Dipika, but she held her composure and closed out the match with aplomb. 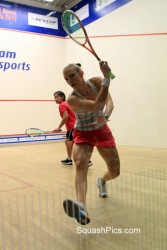 The evening session resumed with England’s in-form Laura Massaro against Hong Kong left-hander Annie Au. Massaro has just moved up to a career best number four after her success in the US Open last month, and was looking to celebrate her 28th birthday in style. However, Au  is also on the rise up to a high of 7, after reaching the final of the Monte Carlo Classic, and is always a dangerous opponent.

The match was as close as those stats would suggest, with the Englishwoman just managing to stay ahead for most of the first game before pulling away at the end, then having to fight back after being a couple of points behind for most of the second. The hot bouncy conditions and court probably suited Massaro’s more conventional game more than Au’s deft boasts, drops and lob but each point had to be worked hard for with both players covering all of the court.

An English women’s semi-finalist was guaranteed when Jenny Duncalf battled past Joelle King. The hard-hitting Kiwi matched Duncalf, the second seed, all the way for half an hour, but from the outset of the third the Englishwoman took control, taking the last two games for the loss of just four points.

Women’s Second Round (bottom half)