Ryan Cuskelly downed the highest-ranked player in the qualifiers of the Delaware Investments US Open to lead a pair of Australians through to the main draw of the fifth PSA World Series squash event of the year in Philadelphia.

Day two of the 2011 US Open saw the conclusion of the men’s qualifying competition, with two matches in each of four Philadelphia clubs.

At Drexel University, where all the main draw matches will be held on an all-glass court, Cuskelly faced top-ranked Indian Saurav Ghosal, the world No26 from Kolkata.

Ghosal found the Australian just too steady and too determined as Cuskelly battled his way to an 80-minute upset. The first two games were shared, then the New South Wales-born 24-year-old took a crucial lead after saving a game ball in the third game.

Ghosal’s renowned speed around court was much in evidence, but Cuskelly was controlling the rallies well, and more often than not it was the Indian who was going for the risky shot to try to finish the rallies.

Midway through the fourth the effort seemed to be telling on Cuskelly as, for the first time, he looked fatigued and from four-all he fell 8-4 behind with Ghosal seeming to be taking charge. But the left-handed Aussie found some extra reserves to level at nine-all and force two final errors from the Indian racket to win 11-7, 6-11, 13-11, 11-9.

“I found a couple of extra gears,” said world No42 Cuskelly after the match. “It’s called training,” quipped coach Rodney Martin, the former world and US Open champion who has been working with Cuskelly in New York.

“I wouldn’t have minded a shorter match,” added the winner. “But I have to be happy with taking out the top qualifying seed to make the main draw.

“The work I’ve been doing with Rodney is starting to pay off now, I’m able to play the type of game I want to play, keeping it tight, forcing the loose ball out of them and attacking when the opportunity comes. I felt my game was struggling, but he’s really given me a boost.”

Cuskelly’s reward is a meeting with fellow Aussie David Palmer, the eighth seed and 2002 US Open champion. 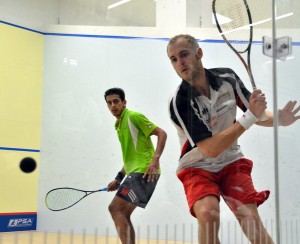 There was further disappointment for the Indian camp at Drexel when Siddharth Suchde, from Mumbai, went down 7-11, 11-8, 11-5, 11-9 to Swiss number one Nicolas Mueller.

Mueller had to withstand a fast-paced attack from Suchde, who took the first game and opened up a good lead in the second.

Unfazed, Mueller fought back to take the second and third games, but in the fourth Suchde again attacked at pace and led 7-4. His strategy was high risk though, and several clips of the tin brought Mueller back into the game, and from nine-all two more errors brought relief to the Swiss and disappointment to the Indian.

“It was a tough first two games,” said Mueller. “He played well to go 1/0 and 5-2 up, but I was just too loose. I managed to get some quick points to get back into it, and started to control it better in the third. The last was point for point, he hit a few winners but fortunately he hit more tins.

“I’m happy to be in the main draw – I don’t mind who I get, you have to beat everyone to win the tournament!” Later, the draw pitched world No32 Mueller against England left-hander Jonathan Kemp, ranked ten places higher.

Zac Alexander, the last-minute entrant who upset Stephen Coppinger in the first round, became the second Aussie to qualify after beating Egypt’s world junior champion Marwan El Shorbagy 11-2, 12-10, 3-11, 11-8 in exactly an hour.

Alexander drew the short straw as he came out of the hat of qualifiers first, to be slotted against top seeded EnglishmanNick Matthew, the world champion and world number one.

More details and the full draw on the Official Website: www.usopensquash.com