After winning just a single point in the opening game, Egypt’s world No2 Ramy Ashour went on to overcome Nick Matthew, the world number one from England, in four games in the final of the ROWE British Grand Prix to retain the PSA World Series squash title at the National Squash Centre in Manchester.

Matthew was in dazzling form in the first game while Ashour had a ‘fallout’, he later admitted.

But, with two successful victories over Matthew in the last six weeks, Ashour bounded back into the match – quickly building up a 5-1 lead in the second as the Yorkshireman’s control began to evaporate. 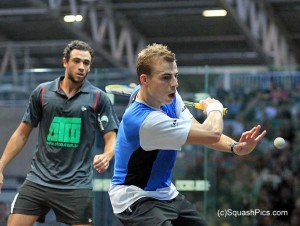 More and more errors crept into the local hero’s game as the mercurial Egyptian claimed winners from all parts of the court before going on to claim his 1-11, 11-3, 11-7, 11-4 victory in 67 minutes.

The triumph marks Ashour’s third PSA World Series title of the year, and the 22nd Tour trophy of his career.

“This court has never let me down,” said the 23-year-old from Cairo who is unbeaten on the ASB all-glass court in four appearances since the World Open in 2008. “It’s just an honour to win this prestigious event another time.

“That was the best game I played all through the tournament,” added the jubilant Egyptian. “I felt I got better and better all week.

“Every time you play Nick you have to be 100% focussed – he’s very fast on court. I have to adapt my game against him and keep as solid as I can.

“I may not be one of the oldest guys on the Tour, but I have spent my whole life since I was six years old working towards this. But I always try and learn something new from each match.” 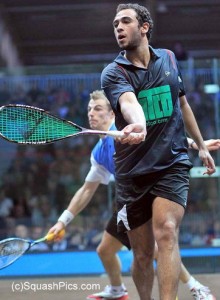 When asked to explain the first game, Ashour said: “I had a bit of a fallout in that game – and Nick came out fighting. But sometimes it’s like that. You have patches in a match where you lose concentration, sometimes they’re in the middle, sometimes at the end – but this time it was at the beginning.

“But I am very pleased with the win – and want to thank various people including my sponsors Ziad and EgyptAir, my coaches Mohamed El Said and Hosam, my manager Mick Todd, my brother Hisham, and my feeder Hisam Ashoush.”

A downcast Matthew, who lost to the Egyptian twice in August – in the Australian Open final and the World Team Championship final – admitted that he lost his way in the middle of the match.

“There as a crucial point in the second game where I got frustrated by a few decisions and lost my concentration for a few minutes,” said the 31-year-old from Sheffield. 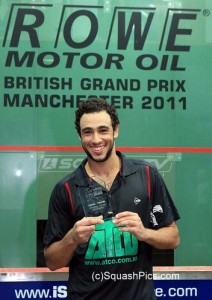 “Then he came back like a steam train – he was just too good.”

Despite his defeat, Matthew will retain his world number one ranking.

“It doesn’t feel like I’m world number one,” said the Yorkshireman. “He’s beaten me now three times in a row.

“But I’ll go away and come back stronger.”

Ashour and Matthew, who have contested all four PSA World Series finals this year, lead the latest 2011 World Series Standings by a considerable margin – Ashour in the lead with 365 points and Matthew in second place.

There is just one change in the all-important top eight – with Karim Darwish, a British Grand Prix semi-finalist, moving into eighth place after competing in only two World Series events this year.